Pastors Who Are Playing Church Instead Of Preaching The Truth

Romans 16:17-18, “Now I beseech you, brethren, mark them which cause divisions and offences contrary to the doctrine which ye have learned; and avoid them. For they that are such serve not our Lord Jesus Christ, but their own belly; and by good words and fair speeches deceive the hearts of the simple.”

The Holy Bible teaches us to avoid churches and pastors who stray from the teachings of the Word of God. Although I am an Independent Fundamental Baptist, most Baptist churches today have been duped by the modern counterfeit Bible versions (which means they are no longer “fundamental,” unless you mean too much “fun” and not enough “da-mental”). Atheist and theoretical physicist, Stephen Hawking, correctly states: “The greatest enemy of knowledge is not ignorance, it is the illusion of knowledge.” Today's apostate pastors have the illusion of knowledge in the new Bible versions, but in reality they have been woefully deceived by the Devil. All of the modern Bible versions, which originate from the corrupted Alexandrian manuscripts, maliciously attack the deity of Jesus Christ, remove the Godhead, diminish the preeminence of Jesus, and wrongly redefine what it means to “repent” to be saved. Have you been deceived?

“Without education, we are in a horrible and deadly danger of taking educated people seriously.”
―G.K. Chesterton, Author

Notice that these bad pastors do not really serve Jesus Christ; but rather, “THEIR OWN BELLY”! That is, it is just a career to them, a way to pay the bills. No pastor who approaches his duty as “a job” should ever be ordained nor allowed behind any pulpit. The pastor ought to be a man of God, who actually walks with God. That's why I love listening to Dr. Jack Hyles' preaching, because you feel like you've been with a man who's been with God when you hear him. I am always encouraged, lifted up and edified after hearing Dr. Hyles preach. Sometimes I get my face ripped off, and the shoe fits just fine (ouch!), but we all need that kind of scathing, blistering, loving, hard-preaching to keep us in line. Granted, nothing can substitute for the Word of God, which Dr. Hyles readily admits himself.

People who continually listen to music, text others, watch television, gab on their cellphone and surf the internet, without ever listening to any Bible-preaching are carnally-minded. What a foolish way to waste one's life! Hardly any of my web visitors take advantage of the great preaching videos that I promote. How tragic and sad! You can listen to the same music hundreds of times and never glean the least wisdom from it, but every sermon you hear increases your level of wisdom!!! Oh, how we all need wisdom. Proverbs 4:7, “Wisdom is the principal thing; therefore get wisdom: and with all thy getting get understanding.”

Sadly, most pastors today are merely “playing church,” making a public appearance three times a week, but actually doing more harm than good by promoting the satanic Bible versions and a false plan of Lordship Salvation. What is “Lordship Salvation?” It is the error of confusing Discipleship with Salvation. The Bible plainly defines “the Gospel” in 1st Corinthians 15:1-4 as Christ's death on the cross for our sins, His burial, and bodily resurrection three days later. If you admit that you are a sinner, which is the purpose of God's law according to Romans 3:19, and believe the Gospel, you are saved! That's it!

In the heresy of Lordship Salvation, more is required, which often includes: ceasing for a sinful lifestyle (behavior modification), confessing Christ before men, reformation, forsaking the world, turning from sins, committing one's life to Christ, inviting Jesus into one's life, surrendering to Christ's Lordship by declaring “Jesus as Lord,” and following Jesus as His disciple. Although there is a proper place for all of the preceding things in a believer's life, NONE OF THEM CONSTITUTE THE GOSPEL!!!

“There is nothing more frightful than ignorance in action.” ―Johann Wolfgang von Goethe, Collected Works

Pastors who have been warned about the perverted modern Bible versions, but couldn't care less, clearly care about serving their own bellies more than seeking and preaching THE TRUTH to this generation.

“Being ignorant is not so much a shame, as being unwilling to learn.” ―Benjamin Franklin, U.S. President

Have you tried to warn straying pastors, like the Bob Jones University camp, who don't care and continue to use and tolerate the satanic Bible versions? I certainly have, and it grieves my soul. Benjamin Franklin, an unsaved man who denied Jesus' deity, knew that unwillingness to learn was a much bigger problem than ignorance!!! Truly, the children of the world are wiser than professed “Christians”! Luke 16:8, “And the lord commended the unjust steward, because he had done wisely: for the children of this world are in their generation wiser than the children of light.” Certainly, despite his brilliance as a statesman, Mr. Franklin was a fool who died in his sins for rejecting Jesus Christ.

The popular excuse is that bilingual Americans need an “easier-to-read” Bible version. Although it's a seemingly innocent claim, it is of the Devil and completely false. The new Bible versions which remove the word “begotten” from John 3:16, teach “repentance” as “a change of life” instead of “a change of mind” (Greek: metanoia), and cater to the feminist agenda are WICKED!!!

I would tend to agree with Sir. Isaac Newton, who said:

“I can calculate the motion of heavenly bodies but not the madness of people.” ―Isaac Newton, physicist

When I look at the following picture of a well-marked Bible (it looks like a New International Version), indicating much diligent study, I cringe when I realize that the new generation today are being directed into the modern satanic Bible versions. The New International Version (NIV) is straight out of the very pit of Hell. When I attended Hyles-Anderson Bible college (1985-1993), I went through (all King James Bibles) three John R. Rice reference Bibles (patched up with electrical tape), one Thompson Chain-reference Bible (given to me by my father), one Classic Note Study Bible published by Dr. Jack Hyles, and a bunch of pocket New Testaments (including one that I laid in the casket of a dear friend who commit suicide by shooting himself). There's nothing more important for the Christian than to abide continually in the Word of God. Thus, it is critically important that you have an uncorrupted Bible! 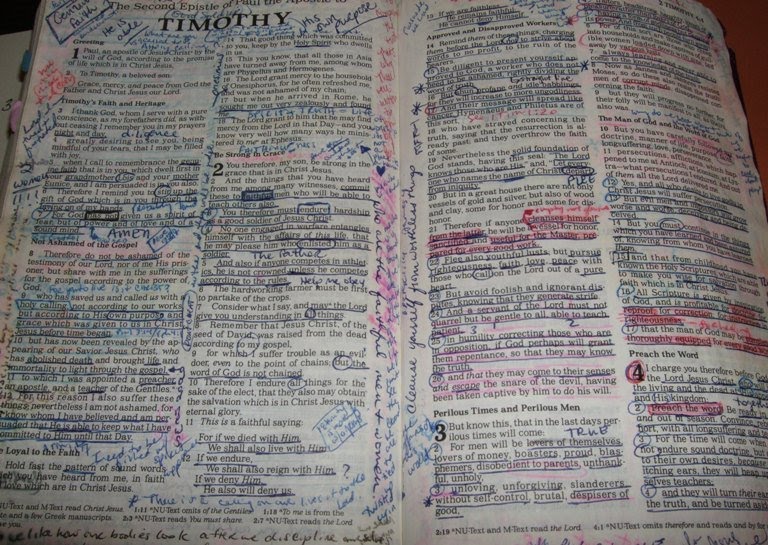 ABOVE: Much dangerous study by a victim of the satanic New International Version!

Is your church congregation playing church or really serving God? You cannot have a heart for God if you don't have a heart for THE TRUTH. It's a big deal that the new Bible versions are radically different than the trustworthy King James Bible. Denying the facts don't make them go away! Satan is a real spirit being, and the Bible warned us that his false ministers would try to creep into the churches (Jude 1:4). There are many tares (weeds) in the churches today, who are bringing John MacArthur's satanic Calvinist false Gospel into the fold. John Calvin (like Martin Luther) came out of Roman Catholicism, but Roman Catholicism didn't come out of him! Calvin's false plan of salvation requires behavioral modification to validate salvation, which is nothing but front-loading the Gospel; to “front-load” means to:

1. To arrange or plan (a schedule, project, or process, for example) so that a large portion of activity occurs in an early period: front-loaded the primaries so that most of them occur early rather than later in the election year.

2. To incur or pay off (expenses, for example) in an early period of a fiscal arrangement.

Those heretics who teach Lordship Salvation (requiring a commitment to follow Christ and surrender one's will to obey Him at the time of salvation) are front-loading the Gospel, demanding discipleship to receive the free gift of eternal life. This is a false Gospel. This is “Another Gospel” (2nd Corinthians 11:3-4). This is religion, which does not produce the new birth by the Holy Spirit of God (John 1:12-14). Salvation is simply a sinner receiving the Gospel (Galatians 3:2).

Unsaved religious tares are bringing the satanic Bible versions into the churches. They're bringing in Pastor Rick Warren's ecumenical emerging church apostasy into the churches. All churches have tares! Beware of false prophets! One of the biggest reasons why the Devil is successfully corrupting the Gospel today is because few preachers expose the satanic Roman Catholic religion anymore. Nearly all Contemporary Christian Music (CCM) artists are friendly toward Catholicism, and many are Catholics! Kindly, singer Amy Grant has been praised by Catholics as a great “Christian role model” for Catholic youth. What does that say about Miss Grant's profession of faith? It says she is a big phony!!! I hate exposing heretics, ecumenical Trojan Horses (like Amy Grant and Billy Graham), and wicked influences (like Maroon 5 and Taylor Swift) on youth today, but I love God and right more than I hate exposing wrong. I love teenagers more than the world exploits them. As Pastor J. Frank Norris said, “I'd rather be in trouble with the Devil than be in trouble with God!”

Every born-again believer ought to contend for the Christian faith, exposing the lies of Satan (Ephesians 5:11). Today's cowardly, worldly and carnal believers couldn't care less about fighting the good fight of faith, because their deadbeat pastors don't care either! Everything rises and falls on leadership!!! Young people are dying for something to believe and stand for, and they want to get involved; but they can't if the churches are spiritually dead, stuck in deeper-life mode, and there is no zeal to contend for the faith, preach the Gospel and make a difference!!! WALK WITH GOD!!! Hebrews 12:29, “For our God is a consuming fire.” END