Van Halen's Dead End In The Lake Of Fire

“Some people say that life is a cesspool of darkness and despair. Well,
we in Van Halen are sailing through it on a yacht.” —David Lee Roth

Ecclesiastes 8:12-13, “Though a sinner do evil an hundred times, and his days be prolonged, yet surely I know that it shall be well with them that fear God, which fear before him: But it shall not be well with the wicked...”

ABOVE: Van Halen concert in Louisville, Kentucky on February 18, 2012

One of the most infamous Rock 'N' Roll band's of music history is VAN HALEN. What began in 1972 as a simple band in Pasadena, California quickly by 1977 became a worldwide phenomena in music history. Van Halen drew crowds as large as 500,000 fans at once in South America and around the world, with screeching guitars, thundering bass, glorifying sin, and praising Satan with their music. The band has sold 80,000,000 records worldwide as of 2007. The band says they're going strong and have no plans to stop rocking!

One of their most popular songs (if not the most) is RUNNING WITH THE DEVIL from their 1978 album titled VAN HALEN. If you click the image above you can see how old and silly they are now 34 years later singing the same song. After 40-years VAN HALEN are still RUNNING WITH THE DEVIL. But their time is running out; judgment day is coming (Hebrews 9:27).

In the video, you'll hear David Lee Roth at the beginning of the song call it a “benediction” (a ceremonial prayer invoking divine protection). It certainly is a benediction to Satan, the god whom they serve. Life is so short and these men will be in the fires of Hell before too long. Death can happen at any moment. It is sad to see Eddie Van Halen's son, Wolfgang, play bass in the band. Wolfgang is following his father into spiritual destruction. They are all pulling on the same rope as the Devil. They really don't believe that there's a Hell that burns with fire and brimstone. 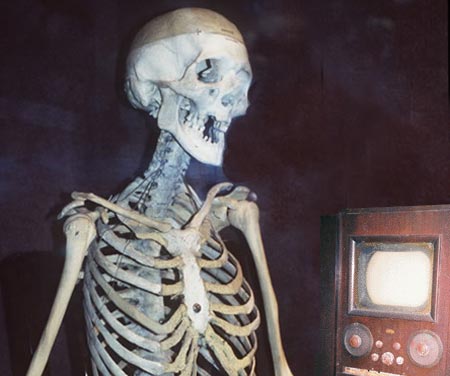 It's a big joke to them, like all the tens-of-millions of fans worldwide singing ACDC's HIGHWAY TO HELL. You have the choice to run with the Devil and travel the highway to Hell if you'd like, but you couldn't offer me all the wealth, pleasures and fame that this world has to offer in exchange for my soul's eternal happiness. I'll take Jesus Christ!

Not surprisingly in this crazy world today, Alex Van Halen (the band's drummer) is an ordained minister and performed the wedding of his brother Eddie in 2009. Eddie and Alex Van Halen are both hellbound Roman Catholics. Just like Gene Simmons of the demonic Rock band, KISS, so also is David Lee Roth Jewish and a non-believer in Jesus Christ.

Roth is known for his sense of humor, who stated “Some people say that life is a cesspool of darkness and despair. Well, we in Van Halen are sailing through it on a yacht.” Satan has rewarded the members of Van Halen for their loyalty and service. VAN HALEN has succeeded in runing the lives of hundreds-of-millions of teenagers and family, leading them into sexual immorality, rebellion and lives without God. Numerous recent videos have emerged of the band doing interviews, performing in concert, TV shows... all happy, smiling and having fun... the time of their life! But the Bible says it shall not be well with the wicked (Ecclesiastes 8:12-13). The sinful world receives their own...

The world receives Dave Mustaine of MEGADETH (despite his profession that he is a born-again Christian) because Mr. Mustaine still performs heavy metal Rock music, produces satanic albums, fellowships with blasphemous bands like SLAYER who curse the name of Jesus Christ.

I just believe that when you play long enough you’re able to execute with your fingers, whatever God gives you… And God’s got a sense of humor, too–sometimes he gives me sh*t, ’cause not everything I do I like. ...Yeah, I thank God on my knees that I’m alive and obviously to be sober and to be working with my son. I’m so damn blessed it’s beyond words.

What blasphemy! God doesn't give Eddie Van Halen the hellish music he plays. God gave him the talent, health, intelligence and free will, but God doesn't make anyone commit evil and Rock music is evil. Why would God give Eddie Van Halen the music for songs that praise and promote fornication, oral sex, prostitution, adultery, drug and alcohol abuse, rebellion, Devil worship and every form of wickedness?

Eddie Van Halen was raised in a Dutch Roman Catholic family in the Netherlands and moved to Pasadena, California at age 7. Eddie is still a devout Catholic today, and his brother Alex is an ordained Catholic minister. Clearly, Roman Catholics are not going to Heaven, because they trust in the arm of man to save them. The sacraments of the Catholic religion are a road to damnation in the Lake of Fire. Catholics may talk much about God, but their heart is far from him. In vain they do worship Him, teaching for doctrines the commandments of men (Mark 7:9-13). They have churchianity without Christianity. Catholics have a form of godliness, but deny the power of the gospel of Jesus Christ (2nd Timothy 3:12; Romans 1:16).

James 4:7-10, “Submit yourselves therefore to God. Resist the devil, and he will flee from you. Draw nigh to God, and he will draw nigh to you. Cleanse your hands, ye sinners; and purify your hearts, ye double minded. Be afflicted, and mourn, and weep: let your laughter be turned to mourning, and your joy to heaviness. Humble yourselves in the sight of the Lord, and he shall lift you up.”

The Freemasons worship the goat-headed Baphomet (pictured below), as their god of enlightenment.

The Beast sits atop the world. The moons may also suggest that this is the Prince of Darkness.

The moon is also an accurate metaphor for Satan, masquerading as a 'source of light'

It can only reflect the true light down upon those living in darkness, and it pales in comparison.

Satan is the god of this sinful world (2nd Corinthians 4:4) and as such demands allegiance from those who desire fame, fortune and power. In Luke 4:6 and 7 Satan said to Jesus... "All this power will I give thee, and the glory of them: for that is delivered unto me; and to whomsoever I will I give it. If thou therefore wilt worship me, all shall be thine."

Although Jesus declined Satan's offer, wicked men and women have been accepting Satan's offer throughout history, worshipping the Prince of Darkness. It's simple... if you want to be massively successful in this sinful world, then you've got to sell your soul to the Devil. It's no coincidence that our highest politicians are all going around flashing Satanic hand signs. How do you think they got into power?

Please understand that my intent for writing and publishing this needful article is NOT to condemn nor criticize David Lee Roth, the Van Halen brothers, nor anyone else; but rather, to shed Biblical light upon the wickedness of Rock music of all types, and the occult-owned and controlled music industry that seeks to destroy the lives of youth everywhere. James 4:4 says that to befriend (assist) the sinful world is to be the enemy of God. I am God's friend, are you?

Darkness cannot stand light and the Bible is that precious Light! Psalms 119:105, “Thy word is a lamp unto my feet, and a light unto my path.” END

“To open their eyes, and to turn them from darkness to light, and from the power of Satan unto God, that they may receive forgiveness of sins, and inheritance among them which are sanctified by faith that is in me.” —Acts 26:18

Revelation 14:11, “And the smoke of their torment ascendeth up for ever and ever: and they have no rest day nor night, who worship the beast and his image, and whosoever receiveth the mark of his name.”

ACDC's Brian Johnson Wants a God Who'll Look After Him