A Common Misunderstanding Of Matthew 7:21

Acts 20:21-23, “Not every one that saith unto me, Lord, Lord, shall enter into the kingdom of heaven; but he that doeth the will of my Father which is in heaven. Many will say to me in that day, Lord, Lord, have we not prophesied in thy name? and in thy name have cast out devils? and in thy name done many wonderful works? And then will I profess unto them, I never knew you: depart from me, ye that work iniquity.”

Our text passage from Matthew 7:21-23 is frequently misinterpreted by sincere but naive students of the holy Bible. To the naive, this Scripture seems to teach that that forsaking a sinful life or doing “works” to validate one's faith in Christ is mandatory to have eternal life. May I quote to you again from our text Scripture passage in Matthew 7:22, they said “have we not prophesied in thy name? and in thy name have cast out devils? and in thy name done many wonderful works?” When God the Father turns them away into Hell one day at The Great White Throne Of Judgment, in horror they will attempt to defend themselves, saying, we have done many wonderful “WORKS!” These religious, but lost, people were trusting in their own self-righteous WORKS!

The best way to interpret the Bible is with the Bible. We learn what “THE WILL OF THE FATHER” is in John 6:40, “And this is the will of him that sent me, that every one which seeth the Son, and believeth on him, may have everlasting life: and I will raise him up at the last day.” God's will concerning salvation is simply for each person to admit their guilt of sin, that is, their SINNERSHIP (Romans 3:19), and believe on Christ Who died on the cross for OUR SINS, was buried, and then resurrected from the dead after three days (1st Corinthians 15:1-4). To say that faith in the gospel is not enough to save an admitted sinner, and to add the unbiblical requirement that a person must intent to reform, forsake the sinful world, turn from sinful living, and make a full surrender to Christ to be saved, is a false gospel that cannot produce the new birth.

This heresy is commonly called “Lordship Salvation,” teaching that a person's faith is not valid unless someone is first willing to depart from a life of sinful bad habits. Chip Ingram and Ray Comfort are two of the biggest offenders, teaching a perverted view of the gospel.

I love J. Vernon McGee and he's one of my favorite Presbyterian preachers, and I promote him still; but he also misinterprets Matthew 7:21 in his Thru The Bible commentary on Haggai (see about 3 minutes into the introduction), defining doing “the will of the Father” as “works.” No, that is incorrect. As I just showed you, the unsaved religious people in Matthew 7:22 were in big trouble because (they were trusting for salvation) that they had “DONE MANY WONDERFUL WORKS,” but they had not done the will of the Father, which is to completely REST in Jesus Christ (no works). This is plainly taught in Hebrews 4:1-11. Jesus is our Sabbath today, in Whom we completely rest, ceasing from from OUR OWN WORKS (Hebrews 4:10), and instead resting in Jesus Christ to be saved. Hebrews 4:10, “For he that is entered into his rest, he also hath ceased from his own works, as God did from his.”

One common thing that I've noticed in religious, but lost, people is that they are in denial of the truth, damning themselves, being subverted of themselves (Titus 1:10-13). So also are the proponents (supporters) of the heresy of Lordship Salvation, who deceitfully claim that salvation is by grace alone, through faith alone, in Christ's death of the cross alone, and his subsequent resurrection; BUT, at the same time they all claim that SOMETHING MORE is required to be saved. They all mandate, absolutely requiring for salvation, that a sinner intend to reform, forsake the sinful world, make full surrender to serve Christ as Lord, and be willing to turn away from sinful living to be saved. This is a false plan of salvation. This is ANOTHER GOSPEL (an excellent book by Dr. Harry Ironside) that the apostle Paul warns us about in 2nd Corinthians 11:4-5.

You get saved by NOT trying to get saved! You simply rest in the finished redemptive work of Christ, which was completed when His literal, liquid, precious, blood was sprinkled upon the Mercy Seat in the heavenly Holy Place.

The following is an EXCELLENT explanation of Matthew 7:21-23 by Michael P. Bowen, from his needful book titled, “I NEVER KNEW YOU” . . . 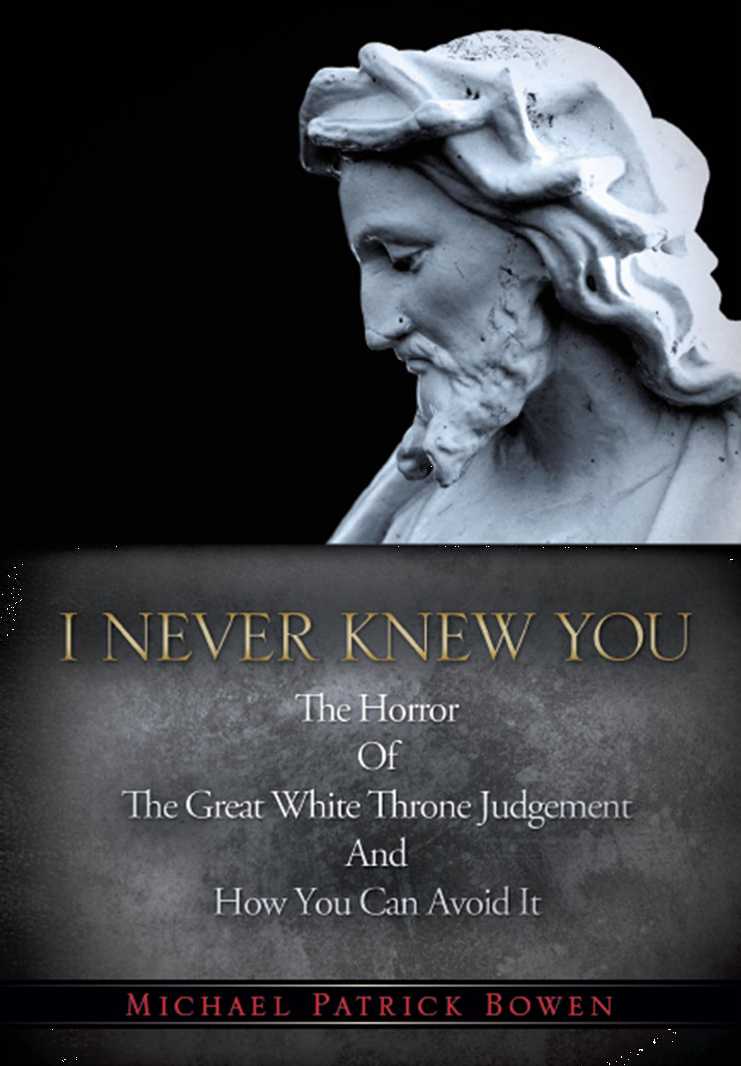 I urge you, reader, to understand that Christ has but one way into His heaven, and that way is through trusting in Him alone as your only hope of heaven. To trust Christ as your only means of entering heaven you must first realize the penalty for sin, which is eternal death and separation from Him in the lake of fire. Once you realize you are under this eternal “death penalty,” you then trust that Christ paid for your sins by His death on the cross and that He arose from the grave three days later. Because Christ knows every single thought I Never Knew You you are thinking at this very moment, He “knows” whether or not you have trusted in Him alone, or if you are only placing partial trust in Him and the rest of your trust in living the “Christian Lifestyle” as your hope of entering into His heaven. The latter won’t save you, but the former will save you. You either trust Christ alone or you trust partially in Christ plus your “filthy rags.” To do the latter, you will not make it to heaven; however, if you choose the former, you, at this very moment, have a home in heaven waiting for you! God immediately grants you the gift of everlasting life in heaven the very same instant that you trust Christ alone to save you.

For those who still believe today’s counterfeit plans of salvation, those who are counting on their faith in Christ “plus” their discipleship to Christ to get them into heaven, Jesus says that they will experience the following horrors:

“Not every one that saith unto me, Lord, Lord, shall enter into the kingdom of heaven; but he that doeth the will of my Father which is in heaven. Many will say to me in that day, Lord, Lord, have we not prophesied in thy name? and in thy name have cast out devils? and in thy name done many wonderful works? And then will I profess unto them, I never knew you: depart from me, ye that work iniquity” (Matthew 7:21-23).

These are persons who were trusting in their works alone, or in partial faith in Christ plus their good works, to get them into heaven. Look at the various areas of service in which they brag. They acknowledge Him as “Lord” and then they brag about preaching in His name, about healing in His name, and about the myriad of inexhaustible works of goodness they have done in His name; yet, because they did not trust in Him alone, the way He so clearly tells us to in His bible, He tells them to depart from Him because He sees their good works in His name as “sin.”

As if that were not bad enough, this is the fate of everyone who appears at the Great White Throne Judgement, where they stand not in Christ’s righteousness, but in the filthy rags of their own inadequate righteousness. This is their fate: I Never Knew You...

“And I saw a great white throne, and him that sat on it, from whose face the earth and the heaven fled away; and there was found no place for them. And I saw the dead, small and great, stand before God; and the books were opened: and another book was opened, which is the book of life: and the dead were judged out of those things which were written in the books, according to their works.”

John 3:20 Explains The Meaning Of Repentance

John 3:20, “For every one that doeth evil hateth the light, neither cometh to the light, lest his deeds should be reproved.”

John 3:20 is an excellent Scripture to help us understand what it means to “repent” concerning salvation. Jesus teaches in John 3:20 that unsaved people who love their sins WON'T come to the light to be saved. John 5:40, “And ye will not come to me, that ye might have life.” Notice that jesus didn't say “ye cannot come”; but rather, “ye will not come.”

The Lord teaches that people who love their sinful lifestyle WON'T come to the light to be saved, to avoid being reproved for their sins. That is, they don't want to face the realization that the life they are living is wickedness. The heathen world doesn't want to feel guilty for their sins.

The light is the gospel (good news) of Jesus Christ Who died, was buried and resurrected. 2nd Corinthians 4:4, “In whom the god of this world hath blinded the minds of them which believe not, lest the light of the glorious gospel of Christ, who is the image of God, should shine unto them.” Since the unsaved man refuses to come to the light of the gospel to be saved because he loves his sins, then it becomes clear that the man who repents has changed his mind and is now coming to Christ to be saved. The very act of coming to Jesus Christ to be forgiven of one's sins is plain evidence that repentance has taken place. All that God requires to be saved (concerning sin) is that a person admit they have a sin problem.

Mark 1:15, “And saying, The time is fulfilled, and the kingdom of God is at hand: repent ye, and believe the gospel.” The Greek word for “repent” in this Scripture is metanoia and means “a change of mind.” Notice that repentance concerning salvation is a change of mind and not a change of lifestyle. Although the Bible does not specify what the change of mind is, John 3:20 provides the answer for us.

The word “reproved” in John 3:20 is the Greek word elegchō and means “to confute, admonish: - convict, convince, tell a fault, rebuke, reprove.” The word “confute” means “to prove false or wrong.” The ungodly world do not want to be told that their sexual immorality, drunkenness and abortions are sinful and wrong. Thus, they rename the sin of sexual immorality to “sexual freedom.” The sin of drunkenness is now called “a disease.” The sin of abortion has been renamed to “freedom of choice.” And the vile sin of homosexuality is now considered an “alternative lifestyle.” The Bible calls these acts “sin.”

So the man who repents is the man who turns to Jesus Christ by faith in the gospel to be forgiven of his sins. Please read, Repentance And Faith to understand the inseparable relationship between the two. Repentance is NOT turning away from sins; but rather, it is turning to Jesus Christ by faith because you've realized that you are a guilty sinner under the penalty of God's wrath (Romans 3:19).