Why the Pretribulation Rapture is So Important

1st John 3:2, “Beloved, now are we the sons of God, and it doth not yet appear what we shall be: but we know that, when he shall appear, we shall be like him; for we shall see him as he is. And every man that hath this hope in him purifieth himself, even as he is pure.”

The remedy to getting Christians to live consecrated holy lives is not to corrupt the plan of salvation to bend their arm to do so; but rather, for preachers to lovingly preach hard against sin in the churches, and to (by example) teach believers to walk with Jesus, and to teach others the doctrine of the Lord's glorious appearing at the pretribulation Rapture!

The average church these days doesn't have preaching!!! I mean Biblical, hard, Spirit-filled, preaching!!! Can you imagine attending an Independent Baptist Church, where the pastor spends eight months in Genesis (using expository preaching) and not once mentions Christ's imminent return? Oh, how preachers need to preach on the glorious appearing of the Lord Jesus Christ!!!

Our text verse says in 1st John 3:2, “...when he [Jesus] shall appear, we shall be like him; for we shall see him as he is. And every man that hath this hope in him purifieth himself, even as he is pure.” This can only refer to the pretribulation return of Christ, that is, the Lord is going to return to remove the saints from the world BEFORE the 7 year Tribulation period. This is what the Bible teaches. Some people read the Holy Bible as if it were a newspaper. Since they don't recognize the doctrine of the pretribulation Rapture, they deny it. However, God commands us as believers to “study” the Word, RIGHTLY DIVIDING (dissecting) the Scriptures. 2nd Timothy 2:15, “Study to shew thyself approved unto God, a workman that needeth not to be ashamed, rightly dividing the word of truth.”

One of the main reasons why I preach so much about the pretribulation Rapture is because the Bible teaches that this doctrine compels men to purify themselves, even as Christ is pure. Jesus may come right now!!! 1st John 3:2, “Beloved, now are we the sons of God, and it doth not yet appear what we shall be: but we know that, when he shall appear, we shall be like him; for we shall see him as he is. And every man that hath this hope in him purifieth himself, even as he is pure.” The average church hardly ever preaches about Christ's return. Every pastor ought to preach on a regular basis about the pretribulational, imminent, sudden, unpredictable, return of the precious Lord Jesus Christ. If we as Christians believe that Christ may return at any time, then we are going to stay on our toes.

Jesus taught this truth in Mark 13:32-37. If you want to influence other Christians to live holy, then teach them about Biblical prophecy, knowing that the Lord's return is imminent! As I behold the forming New World Order, and see the whole world embracing the symbols and person of the Antichrist, I'm challenged to live for God more and more each day. Proverbs 4:18, “But the path of the just is as the shining light, that shineth more and more unto the perfect day.”

The great motivation that we have as Christians to serve God diligently is the truth that our beloved Savior may appear at any time. Titus 2:11-13, “For the grace of God that bringeth salvation hath appeared to all men, Teaching us that, denying ungodliness and worldly lusts, we should live soberly, righteously, and godly, in this present world; Looking for that blessed hope, and the glorious appearing of the great God and our Saviour Jesus Christ.” Amen! People who are not serving the Lord are not really looking for the Lord to come back. I heard an awesome Bible study today by Pastor Max. D. Younce titled, “Rewards—The Five Crowns” (MP3).

If we take the teachings of our Lord Jesus Christ at face value, we can only conclude a pretribulation Rapture...

Mark 13:32-37, “But of that day and that hour knoweth no man, no, not the angels which are in heaven, neither the Son, but the Father. Take ye heed, watch and pray: for ye know not when the time is. For the Son of man is as a man taking a far journey, who left his house, and gave authority to his servants, and to every man his work, and commanded the porter to watch. Watch ye therefore: for ye know not when the master of the house cometh, at even, or at midnight, or at the cockcrowing, or in the morning: Lest coming suddenly he find you sleeping. And what I say unto you I say unto all, Watch.”

Now if the Lord isn't returning until AFTER the Abomination of Desolation (the event during the Tribulation when the Antichrist stands in the temple in Jerusalem and declares himself as God - Daniel 9:27; Matthew 24:15; 2nd Thessalonians 2:4), then we would KNOW exactly when the Lord is returning, and there would be no motivation to WATCH for His return. This is simple logic. Anything other than a pretribulation Rapture of the Church contradicts Mark 13:32-37.

Even so, come, Lord Jesus!

Time is running out! 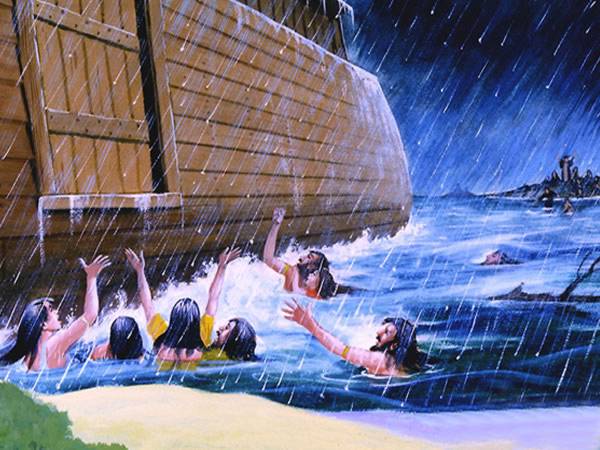 Luke 17:26-27, “And as it was in the days of Noe, so shall it be also in the days of the Son of man. They did eat, they drank, they married wives, they were given in marriage, until the day that Noe entered into the ark, and the flood came, and destroyed them all.”