2nd Corinthians 2:17, “For we are not as many, which corrupt the word of God:
but as of sincerity, but as of God, in the sight of God speak we in Christ.” 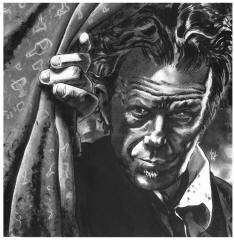 ...These false teachers are usually likable people, and once we learn to like them, their doctrine will not be quite so bad.

...It is not believing right within the movement that makes one a fundamentalist; it is the withdrawal FROM the movement and returning to the original dogma, practices and convictions of the apostate group that gives one the title of fundamentalist. The basic difference is the degree of importance that one places on the doctrine of separation.

That last paragraph is so important. We are not a “fundamentalist” because of what we believe; but rather, because we withdraw from neo-evangelicals who have embraced corrupt Bible revisions (which all teach wrong repentance, the heresy of Lordship Salvation, et cetera). I am a fundamentalist! I stand uncompromisingly against the Alexandrian Bible changing crowd!

Many neo-evangelical pastors are friendly, likable, charming and good working with people, but they are not men of God because they are using Luciferian Bible revisions. Bob Jones University doesn't realize how much damage they are doing to the cause of Jesus Christ by tolerating, promoting and using the corrupt Alexandrian Bible manuscripts! Spiritually, the Alexandrian manuscripts came from Satan, the father of all lies (John 8:44). When I heard a reprobate pastor (a graduate of Bob Jones College) call Dr. Hyles “a cult,” I decided I had better take a closer look at Bob Jones College. To no surprise I found out that Bob Jones University tolerates and sanctions the Alexandrian manuscripts. This is not fundamentalism.

Neo-evangelicals DON'T believe that we have a perfect Bible today. They believe that the Alexandrian Bible revisions are at best “imperfect.” They also believe that the King James Bible contains many translation “errors.” So they don't believe that we have a perfect Bible!!! 2nd Timothy 3:16-17, “All scripture is given by inspiration of God, and is profitable for doctrine, for reproof, for correction, for instruction in righteousness: That the man of God may be perfect, throughly furnished unto all good works.” How can a man of God be “perfect” (complete) if he has an imperfect Bible? Obviously, he cannot! Job 14:4, “Who can bring a clean thing out of an unclean? not one.” Satan is the author of confusion! According to the American Bible Society, there are now over 900 English Bible revisions! Both sides of the Bible inspiration debate cannot be right, somebody is wrong! ...

“In great contests [battles], each party claims to act in accordance with the will of God—both may be, but
one must be, wrong—God cannot be for and against the same thing at the same time!” —President Abraham Lincoln

Beware of the Ungodly Bob Jones University Crowd and Their Ungodly Supporters!

I handed a hardcopy of Dr. Al Lacy's awesome book, “NIV: THE ANTICHRIST'S BIBLE,” to the senior pastor of Harvest Baptist Church on Guam (a fake independent fundamental Baptist church) a few years ago in 2014. The book offended him greatly! I was forced out of the cult! Yes, sadly, Bob Jones University and their graduates, are part of the Alexandrian cult!!! Their religious organizations use, tolerate and promote the Devil's Alexandrian Bible versions (going straight to Hell beneath). There's not a dime's difference between the modern perversions—the new revisions all share the same corruptions. Being ignorant is bad enough for a pastor, but when someone hands them THE TRUTH (like I kindly handed the pastors at Harvest Baptist Church on Guam) and they reject it, scolding the truth-bearer, they are not true men of God!!!

The King James Bible is Preserved and Inspired!

The Inspiration of the Almighty in the King James Bible!

Why I Believe King James Bible Is The Word Of God | MP3 (Dr. Peter Ruckman)

Why I Believe The King James Bible Is The Word Of God (article from Dr. Ruckman's sermon)

“God has a special rebuke, again and again and again in the Bible,
toward those people who keep their neutrality in the work of God!”
—SOURCE: Dr. Jack Hyles, a quote from the great MP3 sermon, “Where Were You In The Battle?”

Adamanchus Origen (185-254 AD) - Took over after Clement as president of the Catechetical School in Alexandria. The Devil was his father. A hateful enemy of the Bible. The most influential religious figure of his generation. He produced a 6-volume Bible. He changed all he disagreed with, like creation. You can find this information in a good public library. Origen described the Trinity as a hierarchy, not as an equality of Father, Son, and Spirit. Origen wrote many books. One being “The Logos Doctrine,” attacking the deity of Christ. For my complete notes on the subject, as taught by Dr. Al Lacy, please CLICK HERE.

Alexandria was founded by Alexander the Great in April 331 BC as Alexandria. Alexander's chief architect for the project was Dinocrates. Alexandria was intended to supersede Naucratis as a Hellenistic center in Egypt, and to be the link between Greece and the rich Nile valley. Alexandria was the intellectual and cultural center of the ancient world for some time. The city and its museum attracted many of the greatest scholars, including Greeks, Jews and Syrians. The city was later plundered and lost its significance.

*Origen was the real founder of the Jehovah's Witnesses (JW's).

*Origen taught that only the original manuscripts were perfect. He did not believe in an inerrant Bible, as most Bible colleges today don't believe either.

IT ALL CORRUPTED IN ALEXANDRIA! Our enemies are literal Alexandrians today!

“I'd rather be a prostitute, or one who sells prostitutes, at the Judgment of Christ, than to be a professor who shakes the faith of young people.” —Dr. Jack Hyles (a quote from the sermon titled, “It Seemeth Right”)

Antioch was at one time the third-largest city in the Roman Empire, after Alexandria in Egypt, and Rome itself. Antioch is located today in the country of Turkey, north of Israel. Here is a bit of interesting history about Antioch:

Antioch was founded near the end of the 4th century BC by Seleucus I Nicator, one of Alexander the Great's generals. The city's geographical, military, and economic location benefited its occupants, particularly such features as the spice trade, the Silk Road, and the Persian Royal Road. It eventually rivaled Alexandria as the chief city of the Near East. It was also the main center of Hellenistic Judaism at the end of the Second Temple period. Most of the urban development of Antioch was done during the Roman empire, when the city was one of the most important in the eastern Mediterranean area of Rome's dominions.

Antioch was called "the cradle of Christianity" as a result of its longevity and the pivotal role that it played in the emergence of both Hellenistic Judaism and early Christianity. The Christian New Testament asserts that the name "Christian" first emerged in Antioch. It was one of the four cities of the Syrian tetrapolis, and its residents were known as Antiochenes. The city was once a great metropolis of half a million people during Augustan times, but it declined to insignificance during the Middle Ages because of warfare, repeated earthquakes, and a change in trade routes, which no longer passed through Antioch from the far east, following the Mongol conquests.

It was from this city that the beloved Greek Textus Receptus originated, upon which our beloved King James Bible has been translated.

Antiochan ideology = Man shall not live by bread alone, but by every Word of God.

*Erasmus (a Greek scholar) published a Greek Bible, put aside the Alexandrian manuscripts, and published a Greek New Testament in Rotterdam. The Waldensians/Anabaptists (“Ana” means “to do it over again”; They would re-baptize those who were already baptized in other religions).

*In 1523 Erasmus wrote a book about the Waldensians, professing faith in Christ. Pope Paul IV said no Roman Catholic could read Erasmus' books. He put out five New Testament texts.

*July 22, 1604 - King James I announced he had selected 54 men to translated the Bible into English (seven men dropped out before the work began because they felt unqualified). There were 47 men. They averaged 60 years of age. They averaged 40 years of Greek and Hebrew. Three men died during the translation.